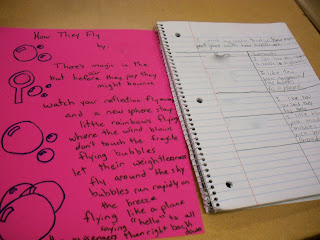 Writers love feedback. One way that I've found to give students lots of feedback very quickly is to have students display their work on their desk. On another sheet of paper, they make a chart with two columns--"Name" and "Comments". (This quick sharing method has been around for awhile, by the way, to the point where I forget where I originally learned about it.)

After their desks are ready, students move to the back of the room. I pull popsicle sticks (my favorite classroom management routine--popsicle sticks with every student's name!) and tell students where to sit to start. Then, they silently move around the room, reading what other students have done and writing their comments. At the end of the session, students return to their own desks and read what others have written about their work.

The first session
When students do this for the first time, it's important to model respectful, polite commenting. I usually don't introduce this until my students are well-practiced with oral sharing and questioning, and we've had many opportunities to share our thoughts. I tell students, "Don't just say that you liked it. Tell the writer what you liked!" I'm always surprised by how many of them complain about the handwriting of other students. I tell them, "Let the writer know that you had trouble reading their writing, but try to comment on what they were saying as well."

Honing skills
With our bubble poems, I took this sharing another step. Students started by thinking about what they wanted someone to notice in their poems. They had been working on using different kinds of figurative language, so many of them wanted their readers to notice how they had come up with an interesting simile, or used personification to show what bubbles are doing. Then, I told students that they would have to use specific details in their comments. Just writing, "I liked your personification" was not enough. What was unique about the personification? What made this piece of writing stand out?

It worked quite nicely. I was able to wander the room as well, adding my own comments to the mix. One student wrote, "I like the bursting volcano simile that's a comparison I never thought of. Cool!" Another wrote, "I love how you made the bubble the narrator."

After students returned to their seats and read their comments, we talked about the process. Many writers were glad that their readers had noticed what they had wanted them to notice. This was great! But some also had some unexpected surprises. "They noticed things about my poem that I didn't even notice," one writer said. "I didn't know that everyone would like my pictures so much," said another writer, who had illustrated her poem with careful, intricate pictures of each simile. Another one said, "I think I need to rewrite my poem. I don't think that anyone got it."

Giving students a chance to share and get feedback in a calm, low-risk environment builds our writing community. Students get to hear what other people think about their writing, and they can use this feedback to inform their future writing.
By Emily Kissner at April 20, 2010