Summarizing Fiction with Elephant and Piggie 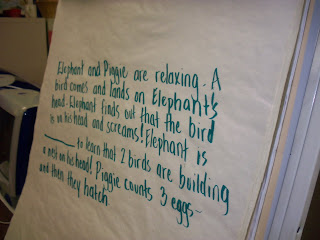 As Aidan and I were enjoying an Elephant and Piggie book a few weeks ago, I couldn't help but notice how much he was summarizing. As you probably know, the Elephant and Piggie books by Mo Willems are told entirely in dialogue. But Aidan started spontaneously narrating each page as we read. At the end, he went over and started telling my husband a pretty decent summary of what had happened in the book.

Ah-ha! If my five year old could do it, then surely this might be a way to help the fourth graders who are still struggling with summarizing. Some of them are still having trouble with getting the right blend of detail and generalization. Others are still trying to grapple with the general story structure. Still others include dialogue in their summaries, listing what the characters say instead of boiling it down into other words.

What would happen if I shared an Elephant and Piggie story? Would the kids laugh? I decided to give it a try. Well, my students were riveted. They started reading aloud with me as I read the book. I read the entire story once, then went back and modeled translating the action into a summary. The students chimed in with their own ideas.

While they were quite adept at coming up with feelings for the characters ("Elephant was frustrated when..."), there were some academic summarizing words that they just didn't generate on their own. Words like suggest and agree do not come easily for them. While they know what these words mean, they still weren't able to come up with them on their own. Think about how much more difficult this makes summarizing!

Our state prompts often encourage kids to include details from the "beginning, middle, and end" of the story. What this often leads to is students randomly picking details from the three parts of the story, instead of reflecting the whole structure of the story. As I modeled summary writing, I tried using Barry Lane's words of "set-up, mix-up, and end-up" to guide students to which parts of the story to include. How is the story started? What is the complication, or problem? How is the problem resolved? These cues helped students to see that they shouldn't choose events from their location in the story, but from their importance to the story.

After I modeled with two books, students worked on their own to write their own summary of a third. Our last was I Am Invited to a Party. In this book, Piggie gets an invitation, and Gerald makes many suggestions about what to wear--first, he asks if it's a fancy party, then a pool party, and finally a costume party. It was so interesting to see how the students dealt with this story. When I gave them a longer, more complex story three days later, their summaries improved greatly.

What did I learn from this? Well, next year I'm starting the year with summarizing these books! I've also seen the value of teaching kids words that are useful for summarizing--words like suggest and explain.

But it's also led me to some deeper thinking. What literacy activities did my students miss? What are they not getting at home, and how can I create reasonable approximations of these activities in my classroom? Thinking about these questions will be my work for the summer!
By Emily Kissner at May 20, 2010 No comments:

Of course, both sessions will have lots of interaction, fun texts, and classroom materials...and Act 48 hours! You can sign up through the LIU website.
By Emily Kissner at May 19, 2010 No comments:

It might seem strange to be teaching about genre at the end of the year. After all, shouldn't that be a topic for September? In September, though, it's hard enough to get fourth graders to tell the difference between narrative and expository text. Adding all of the fiction genres would be just too much.

Now it's quite a different story! As we talk about the fiction genres, the students leaf back through their reading lists, looking for examples of the genres from their reading. They have become talkative and animated, ready to debate the distinctions between genres. (Where does A Series of Unfortunate Events fit? Even though Percy solves a mystery in The Lightning Thief, why is this not really an example of the mystery genre?) Several kids really perked up at the mention of hybrid genres. Many were eager to share their love for science fiction. It really shows how far these students have come!

I made a Powerpoint to introduce the different genres. We did it over several days, talking about examples and sharing stories along the way. (They loved acting out trickster stories when we got to folktales!)

Here is a link to the Powerpoint over at Slideshare.

At the end of a series

They sigh. They droop. They linger by the bookshelves, looking melancholy. They may page through a book or two, but their attention quickly wanders.

They are readers who have finished a series, and they have proliferated in my classroom lately. I've had about seven students finish The Lightning Thief series, and another handful finish Margaret Peterson Haddix's Shadow Children series. Three others have finished the set of three Jessica Day George books. And now...I have a roomful of moody readers.

It's not that I don't have other books. But these students just don't seem to want them. They have entered a serious reading funk.

At first I was frustrated. These are capable readers. They're at the top of their game! The world is theirs! Why are they so mopey?

But, as I was looking over their reading folders and reading their self-assessments, I realized what was going on. I've had the experience of ending a series many times. I always do feel a sense of wistfulness and nostalgia, a sadness that no new books will come from this particular universe. The difference is that I know that there are other books right around the corner. Many of my fourth graders are experiencing this feeling for the first time.

So, how to deal with this? I can't have them sighing and looking out the window every day. But different readers have different coping strategies.

Regression: A few students have gone back to the old familiar standbys. Okay, it galls me a bit to see a student who has just finished the Harry Potter series and the Lightning Thief series to read the My Weird School books by Dan Gutman.

But it serves a purpose. After reading some books with very dark themes, it's natural for readers to want to go back to safe, funny reads. One student even read picture books exclusively for two weeks! I watched her carefully, but I held off on insisting that she make a different choice. I decided that she knew enough about her reading life to make good choices for herself. After two weeks, she settled into a new historical fiction book. It seemed as if she needed to go back to simpler reading for a time.

Nonfiction shift: Two students have immersed themselves in nonfiction. Reading several books on the same topics has brought these readers back to the real world, and helped them to regain enthusiasm for reading. Field guides are special favorites. Because they lend themselves so much to browsing, they are a good diversion for students who have spent weeks in close reading.

A new series: This is dangerous territory. It's so tempting to offer a reader who has finished one series a brand new one to start. But a reader can quickly be turned off by this approach. Often, the first book in a series is the clunkiest and the hardest to love. A reader who has just finished a really great series will often put aside a decent book just because it's heavy on the exposition. (After I finished The Lord of the Rings, it was months before I settled on another series!)

But I have had some success with this approach. Instead of suggesting just one book, I'll offer several different books. This helps to give the reader a sense of choice. The Edge Chronicles, A Series of Unfortunate Events, and the Gordon Korman Kidnapped series have all been picked in this way.

Finishing a complex, deep series is a huge accomplishment for a fourth grader. A reader who has accomplished this milestone may have trouble settling back into the mundane world of other books. When I realized this, I learned that I could help my readers to figure out their next steps. (And, hopefully, cut back on the melancholy!)
By Emily Kissner at May 10, 2010 No comments:

Here is a link to a set of materials that focus on character traits and emotions:

We've been doing the character traits skits for about two weeks now. Students worked in pairs to create dialogue and action to show different character traits. What fun! The students are so inventive and came up with some really neat scenarios. Because we only get to perform about one or two a day, I've been able to notice an improvement in students' word choice as they guess.
By Emily Kissner at May 05, 2010 No comments: