I love teaching because I love learning, and getting out to experience new things is a thrill for me. So when I read that the National Aquarium would be releasing sea turtles at Assateague, I knew that we had to arrange our week to attend!
I never learned about sea turtles as a student. In fact, I don't remember learning much about animals at all--unless you count the sixth grade teacher who made us write notecards about all of the animal groups, working up from sponges. (We never made it past cephalopods.)
Today's students need to learn about sea turtles. Not only are they important in their own right, but sea turtles are so interesting and engaging that they get student attention for larger conversations about ecology, our oceans, and pollution. 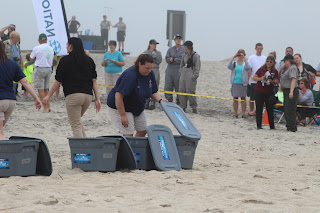 Staff from the National Aquarium set up the area for the sea turtle release at one of my favorite places, Assateague National Seashore. (You can find text structure materials that I wrote about Assateague here.) My youngest was so excited to attend--in his words, "I've never seen a wild sea turtle!" 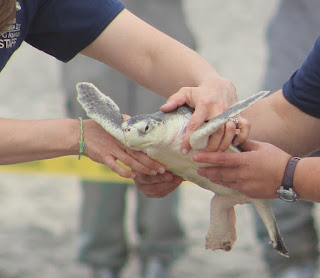 The day was cloudy and threatened rain, but that didn't stop a crowd from gathering. Two green sea turtles that had been rehabilitated by the National Aquarium and ten Kemps ridley turtles from the New England Aquarium were set to be released.
Staff members brought around the turtles for onlookers to see. Everyone got great views! My son was amazed by his chance to see the sea turtles up close.
The turtles were placed down by the surf. Most ambled right in, while a few seemed hesitant. (That water was cold--I'd hesitate too!)      For the rest of the day I thought about the sea turtles, out in the vast ocean, and wondered what they were doing. I wonder what they're doing now.
Even though the weather was cold and rain fell as we were leaving the beach, it was a perfect beach day. 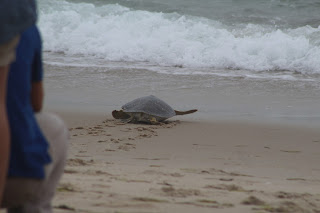 See for yourself how students can become engaged in learning about text structure and sea turtles with this Sea Turtles Expository Text Mini-Unit.
Student-friendly videos about sea turtles can be found on this YouTube playlist.
What are you doing to explore and learn this summer?