One of the hardest parts of teaching nonfiction is the constant scrounging for text. Finding text with the right level, the right topic, the right text features--it takes time and effort.

For the past few years, I've been working on creating sets of texts for teachers to use. I do have a set of "Text Structure Resources" that I send to teachers at their request. Over the summer, I posted Cause and Effect Texts and Activities, followed by Compare and Contrast and Problem and Solution. All of these files include multiple texts that show the text structure, along with activities and teaching tips. The goal is to minimize the effort of scrounging for text. 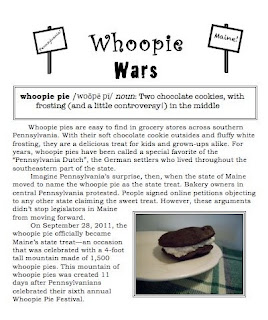 This was a daunting task! This fall, I started to write. And write. And write. I started out with "Whoopie Wars". When I began the research, I firmly believed that the whoopie pie was a Pennsylvania Dutch treat. I even looked in the old Pennsylvania Dutch cookbooks myself (what a wealth of knowledge is available from Google Books!), hoping to find something that others had missed. Alas, no documentation for whoopie pies in Pennsylvania--but a good story. I needed to do some firsthand research so that I could take photos of whoopie pies, so my husband and I spent a Saturday baking whoopie pies with our sons. Research has never been so delicious.

I knew that I would write about monarch butterflies and wood frogs, because I had great photos of both creatures over their lifespans. These articles were easy to write. I look forward to sharing the wood frog article with my students this March, when we bring in some wood frog tadpoles into the classroom.

The biographies, however, proved a little harder. I had originally written "Anthony Wayne" when I was doing an in-service presentation for teachers in Waynesboro.  I decided to do some deeper research and spent a few weekends reading letters to and from Anthony Wayne. This gave me the confidence I needed to write "Dolley Madison", which was considerably more difficult--especially because many of Dolley's documented recollections from later in her life were found to be questionable. Writing this short piece took hours of research from multiple sources to make sure that I was including only the best information. I couldn't get the readability on Dolley Madison low enough, so I went ahead and finished out the set with "Lafayette", a text which my husband already plans to use with his third graders.

The finished product, "Chronological Order Texts for Teaching Text Structure" includes 10 texts, 8 with before, during, and after reading activities and multiple choice questions. It costs three dollars, and hopefully will save you from hours of scrounging for texts. Enjoy, and let me know what you think!
By Emily Kissner at December 28, 2011