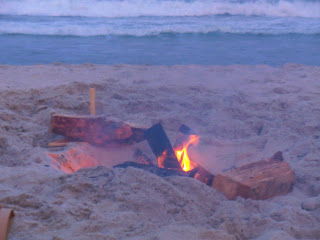 Last week, we were lucky enough to spend several days at the beach. One of our favorite activities is to drive down to Assateague National Seashore and have a campfire in the evening. Assateague, of course, is known for its wild horses.

Well, we started the campfire, looked for ghost crabs, and watched the sandpipers, but there was not a pony in sight. The sun set, a fiery ball to the west, and things started getting dark. Of course, my littlest wanted to leave, but we were enjoying the sounds of the ocean and the warmth of the campfire. Then, in the moonlight, we could see three ponies down the beach. "Look!" I told Aidan and Zachary.

We peered down the beach. One veered up the beach toward the dunes. The other two continued toward us, coming closer and closer. And closer. As we sat on our beach chairs, they cantered down toward us. "Don't worry. They won't come too close," I told Aidan, who was huddled on my lap.

Well, I was wrong. The two came right through our circle of chairs. The white one leaned down and sniffed my husband's head. He sat calmly, still holding the stick for roasting a marshmallow. "Get the camera!" I told my husband, but we realized that the camera was in the other bag, on the far side of the horses. So all we could do was watch.

The other pony, brown and white, leaned down and smelled our bag of graham crackers and chocolate. Then she lifted her head and looked directly and Aidan and me. She took a step closer. What a moment! We sat quietly--okay, I was kind of frozen--and then she turned her head, snorted, and started walking back down the beach.

A cloud of mosquitoes followed in their wake, breaking the spell of the moonlight and the horses. We tried to swat them away, put on more insect repellent, but it was futile. Hurriedly, we repacked our items and raced back toward the dunes.

One of those evenings that I'll remember, long after my Monday evenings are overtaken by planning and Open Houses and schoolwork.
By Emily Kissner at August 09, 2009