Planning for a Nonfiction Topic Study

As I've watched my sons develop into readers, I noticed how they both started to delve deeply into a preferred topic in second grade. My older son read about airplanes and the physics of flight, while my younger son has read everything about cats. Watching these two readers has helped me to think about how topic knowledge is inextricably linked to reading skills. Their background knowledge about a topic helped them to attack and read increasingly more difficult texts.

It seems logical, then, that we should try to replicate this in our classrooms. But topic studies have gone in and out of style. When I started teaching (in the 90s! imagine!), thematic units were popular. But they weren't really structured. The idea--at least as it was communicated to my inexperienced teacher brain--was to gather as many resources as you could on a topic or theme, and then have students create some big project related to the theme.

As time passed and guided reading became popular, themes fell out of favor. Leveling was everything. I was told that trying to gather resources on a topic was useless. We'd never be able to afford to get every book at the levels we'd need, and it was far more important for kids to be reading texts at their levels than it was for them to study a topic. I got around this by starting to write my own texts, apologetically at first. But the more that I watched my own children become readers, the more I realized that seeing the same topics over and over was really important.

Now, topic studies are in style again. Yay! What I like about topic and theme studies as discussed in the Common Core is that they are to be structured with increasingly complex text. This mirrors what I see with Zachary and Aidan...the facts they learn from the easy text become necessary background knowledge to help them comprehend more complex text.

As I plan for this year's version of the Antarctica nonfiction unit, I've tried to be more conscious of how students are building their knowledge. I'm hoping to marry certain concepts about Antarctica with concepts about nonfiction. Here is the plan.

2. Choose core texts.
I'm a weekly planner, so I choose texts for each week. At the beginning, I'm using some texts that I've written. This will help to build up the background knowledge that kids will need to get to the ideas in the more complex texts. But I'll also be using Trapped By the Ice, texts from Beyond Polar Bears and Penguins, and the LTER blog. As you choose texts, it's important to consider how ideas appear again and again. What are the most important concepts you want to wring from the topic? How are these concepts represented in texts?

3. Create a unit anticipation guide.
I love anticipation guides for a unit. Many details about Antarctica are counterintuitive--for example, the fact that polar bears don't eat penguins, and that summer and winter in the Southern Hemisphere are the opposite of here. The anticipation guide is a concrete way for learners to recognize what they have learned from reading and how their ideas have shifted. Presenting learners with opportunities to "rewire" their background knowledge is vital for learning. (For more information on this, see the research by Graham Nuthall...his articles have been so influential to me!)

4. Gather guided reading and auxiliary texts.
This process may take a few years. I pick up books wherever I can. It becomes a sort of "stone soup" situation--everyone working on the unit has a few things to contribute. Surprisingly, even texts that seem only tangentially related often offer kids some little gems of knowledge that they can weave into their schema.

5. Create a list of unit vocabulary.
This year I've started to be much more intentional with my vocabulary teaching. What words do kids need? Which words show up again and again? I do a weekly homework packet in my classroom, and I've included five vocabulary words (along with a related text) in each packet.

It all sounds like a great deal of work, and it is. But it is so worthwhile to hear kids sharing ideas and reflecting on what they've learned across texts. Whether topic studies are in style or not, they are a wonderful way to help students learn.

I'm hoping to put together what I've done with the Antarctica unit into a file. Until then, write to me if you would like any samples. (Please include your email address if you leave a comment! Otherwise, it's tough to figure out how to respond.)

I decided to start with two quick pop-up books. The first reason for my choice was a practical one--I wanted really short texts that we could read in five minutes or less. But the second reason was a little deeper. I wanted to show students how even very short texts can communicate a theme in words and pictures.

This was an impulse purchase a few weeks ago...and it has now become a classroom favorite! As we read it, we talked about several details:
-The author's use of intentional mistakes
-The playful illustrations and bright colors
-The theme that is expressed
-How the text and pictures support the theme

Book 2: Big Frog Can't Fit In
Of course, my students love the books of Mo Willems, so this has already been passed around the classroom on free-reading Fridays. As we read this, we talked about:
-The problem and solution expressed in the book
-The use of pictures and pop-up elements
-The theme that is expressed
-How the text and pictures support the theme

After we read the books, we completed a chart to compare them, looking at the themes, the illustrations, and the text. One student added a new detail: "Both books show a problem that has to be solved!" When we used the chart to write a paragraph, I modeled starting with the heart of the comparison--why these books are being compared.

Using my new Elmo wireless tablet (okay, it is really awesome to be able to write on the board from across the room!), we developed the rest of the paragraph by explaining how both books are similar and different. I made a big deal out of the phrase "on the other hand", talking about how sophisticated and grown-up it sounds. :)

After we did this together, students worked in clock buddy pairs to compare the books Molly's Pilgrim and Weslandia. At this point in the year, I give them a chart with criteria to consider. For these books, the criteria included the themes, how the characters are bullied, how the conflicts are resolved, and so forth. When students went to write their paragraphs, they chose the details from the chart that they wanted to develop. As a result, every pair's paragraph had a different focus. But most were solid and interesting, not bad for early in the fourth grade year! (Ten groups did experiment with "on the other hand", showing me that making a big deal out of the phrase must have made an impact.)

Pop-up books often don't have much of a place in intermediate classrooms...but these books are so engaging that they can really be useful tools.

Point of view is now a fourth grade skill! Hooray!

Cheering was not actually my first instinct. But I've taught point of view to fourth graders over the past three weeks, and I've learned that it is not actually as hard as I feared it might be. Here are some hints to get started.

Start concrete
When I taught point of view in sixth and seventh grades, I could jump quickly into the abstract. We went right into looking at texts and writing them from different points of view.

With my fourth graders, though, I knew that I needed something more concrete. Enter the basket of stuffed animals! I started with the class favorite, Larry the Lobster, and wrote two sentences:

I live in the ocean.

Larry lives in the ocean.

I asked students, "How are these sentences different?" They could see that the sentences were written differently, and grasped at how to verbalize the difference. Then, I showed two more sentences on index cards: 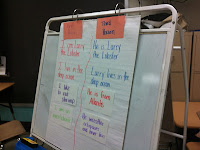 I called on students to categorize the cards. Which ones were the most similar? Why? It was only after they could explain the difference between who was narrating the action that I introduced the terms first person and third person.

Next, students chose stuffed animals for writing buddies. On white boards, they tried writing two sentences about their stuffed animals--one in first person, and one in third person. Once I looked over their sentences, they recopied them onto index cards. We regrouped and took turns classifying each student's sentence and guessing which stuffed animal was the star of the sentence. 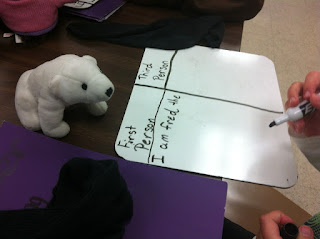 Read and share
Once students had an initial understanding of point of view, we had a huge storm. We were out of school for two days and then spent two days in classes at the high school--how exciting! Our school did not have electricity, but the other schools in the district did. The teachers were wonderfully accommodating and the students were great.

The best part about being in the high school was the high school helpers! I have three students who come up to my school to volunteer in the afternoons. When we were at the high school, they came to our temporary room during their free periods to help out. (Did I mention that they are awesome?)

I split my reading class into three so that students could hear read alouds from each point of view. Luckily I had been planning to do a presentation before the hurricane interfered, so my suitcase was filled with books. I needed short, easy books that high schoolers could quickly read aloud.

Shortcut by Donald Crews is one of my favorite go-to books for teaching so many different ideas. Personal narratives, intertextual connections, suspense, use of long and short sentences....and now point of view!

Mr. Gumpy's Outing by John Burningham was a good choice of a third person book--short, easy, and clearly third person.

Deal with dialogue
Once we returned to our own school, with the excitement of our adventures behind us, we continued our study of point of view. A card match activity was fun--students received cards with pieces of a story in either first person or third person, and had to find the student with the corresponding card.

Dialogue continues to be a challenge for students. Often, students will see text like this:

Students see that word I in the dialogue and say that the story is in first person. In these cases, I ask students: Who is telling the story? Is the narrator a character in the story? I try to lead them to think about what the story is really saying. Then, if they are still confused, I just say---"When we talk about point of view, don't pay attention to the dialogue. Look for what's happening outside the dialogue." And sometimes this works.

Materials
I'm working on putting together some materials for teaching point of view in the intermediate grades. So much of what I found is geared toward middle school students! If you would like some materials, write me an email. (Again!)