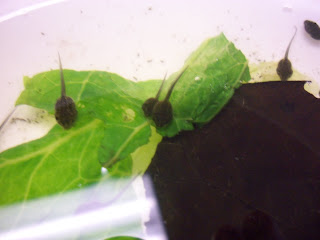 Two weeks ago, I brought in a mass of unknown eggs to the classroom. For the first few days, we thought they were salamanders. Then, they hatched! We found out that they are actually wood frog tadpoles. Their gills were on the outside at first, but are now inside.

I like having the tadpoles in the room. They are the launching point for some great learning opportunities. Here are my favorites!

Tadpole census: After a lesson from our guidance counselor about the census, several students undertook a tadpole census, counting the numbers of tadpoles at different stages in development.

Tadpole drawing: I have a LONG arrival and dismissal time to fill--about half of my class comes in 15 minutes before the rest, and stays 20 minutes later. It's hard to find productive but engaging activities for students during these times. Luckily, the tadpoles are very motivating for the students! Students have been drawing pictures of the tadpoles each day. I've been amazed to notice how the students' pictures have changed throughout the weeks--they have improved at how they were representing the tadpoles and the level of detail that they used.

Microlife observations: Students have also been using the Guide to Microlife to try to identify some of the other creatures that live in the water. Their discussions are fascinating to listen to. Students are citing evidence, pointing to pages in the text, and carrying on long conversations as they try to figure out what else is living in there. (We've found amphipods, copepods, snails, caddisfly larvae, and mayfly larvae.)
By Emily Kissner at April 08, 2010