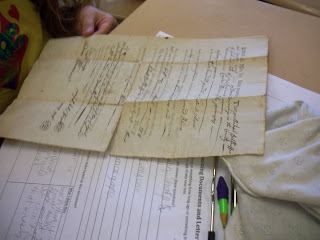 One of my favorite kinds of stories is the story told through letters or documents. In these stories, a reader needs to piece together the details from the letters to figure out how the story is unfolding. These kinds of stories are great for students who are learning about making inferences, as they will be able to practice reading beyond the text to determine what is happening.

Next week, my students will read several stories told through letters. As I've taught these stories before, though, I have found that students have trouble putting them together. I decided to introduce the idea by showing students some letters and having them try to figure out what is going on.

But where to get the letters? As I was thinking about this, I realized that I happened to have just the thing. Several years ago a friend of my father-in-law's gave him a stack of old papers from an auction. We spent an afternoon looking through them, doing just what I want my students to do--figuring out who was writing, why they were writing, and who they were writing to. Why should I scrounge for new letters? These would be perfect.

Just as I hoped, students were fascinated by the documents. (One was a mortgage note dated 1811--wow!) Before I handed them out, we talked about how to care for them and what questions we could ask of them. As students worked on the documents in pairs, they answered two main questions

-What inferences can we make?

Here were some things that we noticed:
-It was difficult to read the cursive of long ago! Some of the documents had the f/s switch, which made it even harder. I reminded students of the cloze passages that we had done several weeks before.
-Students were quick to jump to conclusions, often from a lack of background knowledge. "I think this is about a crime, because it has pounds of silver on it," one boy said. After I explained that this was the currency used in 1811, they examined the document again. When it was time to share with the class, they showed a place where careful sums had been worked out in pencil. "This isn't about a crime, but about how much the one guy owes," the student said. "Here it shows the subtraction problem that he did to find out how much more he had to pay."
-Students made many inferences that related to their background knowledge. "It says here that he needs to pay $30. Back then, that must have seemed like $100!" one student said. The idea that things were cheaper long ago was well-known to students, and they looked for details that connected to this.
-Students weren't satisfied with sticking with one document. They were fascinated by what other people were finding and wanted to roam around looking at more!

If you're interested in working with letter-stories or documents (and you don't have a father-in-law with mounds of old documents), don't worry--there are lots of books and resources available. Here's a quick list:

Dear Mrs. Larue: Letters from Obedience School: This book is amusing because what the author of the letters is saying is quite different from what is really happening.

The Gardener: These Depression-era letters tell the story of a girl who goes to live with her uncle in the city.

The Journey: Also by Sarah Stewart, this story is told through letters from an Amish girl who visits Chicago.

Letters to Mrs. Roosevelt: This is a great collection of letters written to Eleanor Roosevelt during the Great Depression.

Early America: This site, while it does include advertisements, also has many links to online newspaper articles, documents, and other interesting tidbits.
By Emily Kissner at April 24, 2010