For a period of time, my youngest son thought that "chicken" was a multiple meaning word. There was the chicken that was the animal, and the chicken in chicken nuggets. In his little toddler brain, these obviously were not the same things! At around 3, he inquired, "Why are they called chicken nuggets?" He thought for a moment, and then said, "Do the chickens help to make them?"

In order for kids to realize that they know many words that are related to relationship, I used a multiple meaning word web. We looked at how the word "relate" has many different meanings, and they are--heh--related! (Some of the kids found this meta-talk very funny!) We looked at the word relative and talked about their relatives. Then, we practiced relating to one another by listening and trying to understand one another. We talked about how ideas can be related, and finished by sorting words that could describe relationships between people. (This sort was made by my fabulous fourth grade colleague, Colleen.) 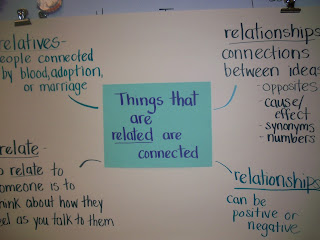 Hopefully, my students now have a better idea of how the words relative, relate, and relationship are connected. Instead of seeing them as isolated words that happen to have similar sounds, they see them as a word family.

And my youngest son? I worried about how to break the news to him that there only was one kind of chicken. But he figured it out for himself as we were eating rotisserie chicken one night. "Is this the animal chicken?" he asked.

"Um...yes?" I replied, worried that he would be upset, or refuse to eat it. But I had underestimated his zeal. He pumped his fist, chortled, and crowed, "Yeah! I'm eatin' chickens!"  The multiple meanings of chicken, united at last.
By Emily Kissner at February 23, 2011