The snowflakes are flying! Today's snow in Pennsylvania was the kind I especially loved as a child...a layer of 3 inches of snow covered by about half an inch of ice. It makes a satisfying crunch as you break through the top layer and step into the snow. It's also especially fun to break apart into big sheets.

Snow presents some great opportunities for easy science investigations. Today, we looked at the volume of snow and watched what happened when it melted. 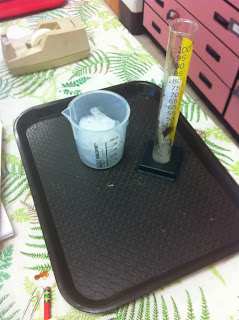 It doesn't get much simpler than this! I took this picture mid-morning, after some of the snow had melted. We started out with 100 mL in the graduated cylinder and 250 mL in the beaker. The boys who got to go out to the playground to collect the snow also filled out a chart that I had made with their classmates' guesses about the final volume of the water.

Having done this several times, I have learned that the final volume of water is always much lower than expected. I've also learned that there is no single rule of thumb to use--it really depends so much on what the snow and ice is like (and even more so on how much the snow collector packed it down into the container.)

Lots to explore here...
Review of volume: My fourth graders still have trouble with the use of milliliters to measure volume. Talking about the initial volume and the final volume gets the word "milliliters" in use over and over again.
Predicting and checking: The routine of making a prediction and then checking the real-world results is always engaging and helpful. Results will vary over several days as the snow changes.
States of matter: This activity helped us to think about the change of water from solid to liquid. Some students expressed surprise at the final volume of water--"Where did it all go?" 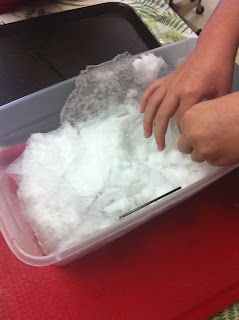 At recess, I filled a tub with a collection of snow and ice and let students handle it for short periods of time. Students noticed that the ice sheets bend light ("they work like glasses!") and that the snow changed when they handled it. All afternoon, they stopped by the science table to check on the progress of our snow--"I can't believe it hasn't melted yet!"

The forecast calls for more snow for tomorrow. If we have school, I hope to capture some snowflakes on some black paper; then we can talk about the shapes that we see. Ken Libbrecht has an amazing site with a guide to snow crystals, and I also have his book, The Secret Life of a Snowflake.

Of course, all of this snowflake study will go quite nicely with our poetry unit...lots to write about with so much snow!
By Emily Kissner at December 09, 2013