This year in Pennsylvania, we get to have an entirely new test in the spring! Instead of the standard open-ended responses of the past, students will have to write passage-based essays. In other documents, this writing has been called a Text-Dependent Analysis.

I have been pretty nervous about this. The first samples that came from the state were awful--the kind of formulaic writing that no thoughtful teacher would want students to produce. "Is this what I'm supposed to do?" I thought. My next thought--"I'm going to have to do much better at TeachersPayTeachers, so that I can still have an income once the inevitable happens."

Well, I couldn't stay pessimistic for long. After all, if I left the classroom, who would identify all of the bugs and the birds around the place? So the easiest path was to figure out how to help kids write good passage-based essays.

Step 1: Teach students how to quote from the text

Teachers who haven't worked with 9 and 10 year olds might be surprised at how challenging students find the process of quoting from text. They don't know how to choose the sentences to support their thinking; they don't know where to put the quotation marks; they get confused about whether to switch from first-person to third-person pronouns. Teaching students how to quote from the text in short, low-stress activities early in the year makes the passage-based essay process much easier.

Step 2: Create a high-quality prompt to go along with a really great text.

My students were working in three different texts in late November, so I made a prompt for each. The prompts were all similar--each one had two areas for analysis.


In the story Molly’s Pilgrim, Molly’s feelings about school change. In the beginning of the story, Molly feels as if she doesn’t belong at school. By the end, her feelings have changed. 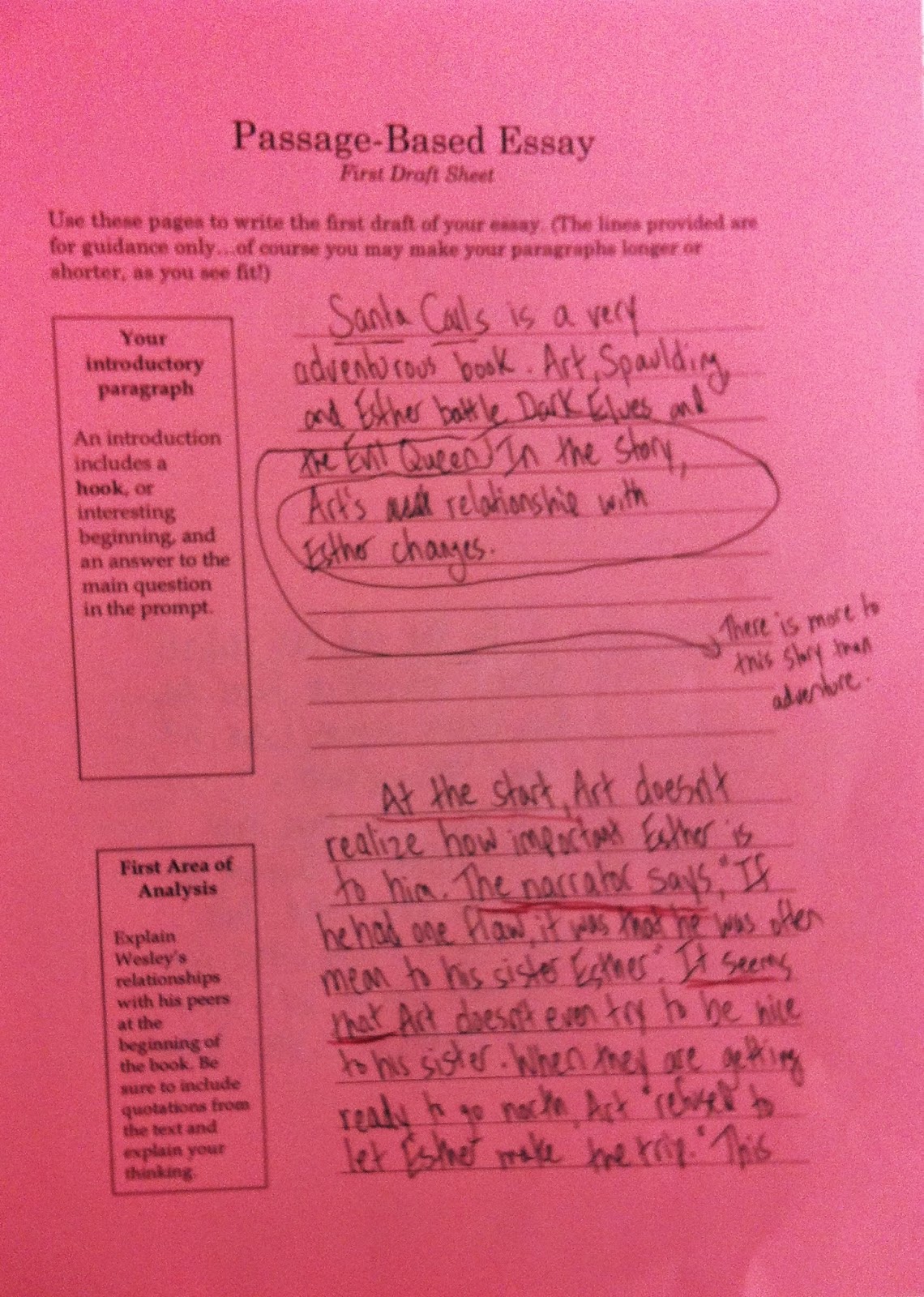 Write an essay analyzing Molly’s feelings about school and how they change over the course of the book. Be sure to include specific details, including quotations, from the book.

To help me keep everything straight I made prompts, checklists, graphic organizers, and rough draft pages on different colors of paper for each text.

I decided to work through the process along with the students. I wrote a fourth prompt, this one for Santa Calls by William Joyce, and I modeled each step of the writing process, from dissecting the prompt to finding text evidence to putting it all together. It worked quite well to model-do--kids didn't have to sit and watch me for very long as I was just showing them the next chunk of what they would do. 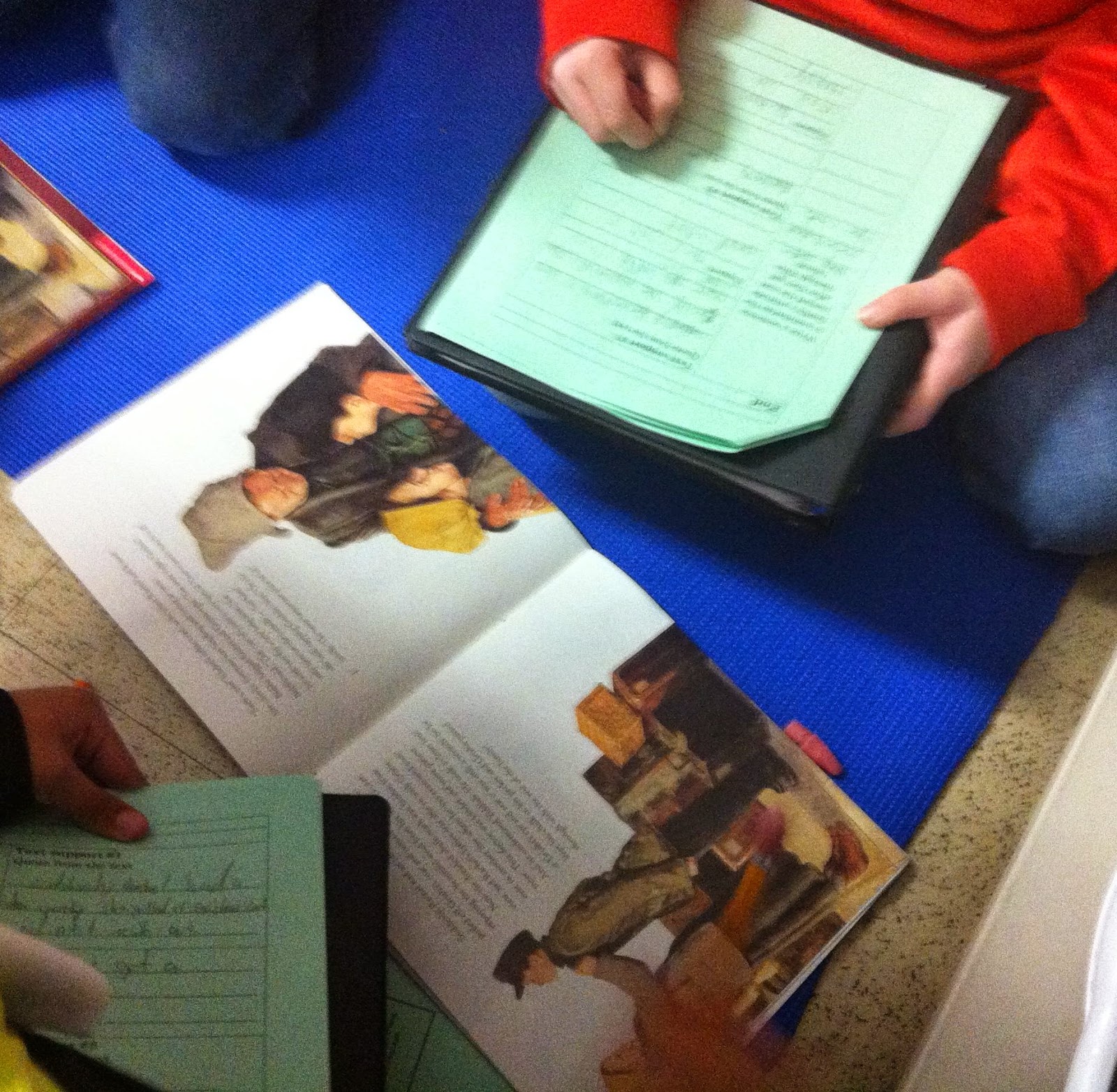 I feel very strongly that my modeling needs to show a sophisticated version of the product--the piece of writing that I can produce as an adult. Kids need to see the real thing. And I did show my real, true, crazy revising process, beginning each session by rereading what I had so far and smoothing out the wording.

In my first reading class, students had read the books as literature circle groups. It was only natural, then, for them to continue to work in their groups as they moved into essay writing. Some groups worked cohesively together, while others chose to do parallel writing and only consult with each other as needed. (In my other class, which I co-teach, students did not work in groups--which I came to regret when I saw how nicely the collaboration unfolded in the first class.) There is so much in this picture that I love--the students sitting together on the yoga mat by the library, books open as they refer to the words and pictures to grapple with the ideas.

Step 5: Don't worry about the time

I had estimated that it would take us a week to write the essays. Well, with discussion of reading homework and vocabulary, independent reading, and holiday schedule changes, it has stretched out longer. I feel a little bit panicked as I think about all that is before me, but I don't regret spending the time on these essays. Students have to do so much thinking as they consider the prompt, select text evidence, explain how the text evidence supports their statements, and write an introduction and conclusion!

I felt a little Grinch-y as we worked on passage based essays two days before holiday vacation. After I modeled writing a conclusion, students settled around the room to work on their essays. One student said, in that contented way that fourth graders have, "This is fun."

Trust me, nothing could have surprised me more. Fun? But this student wasn't trying to butter me up or make a joke. The work of creating, the work of weaving an author's words with her own thoughts to make something completely new--that can be fun. And it took a fourth grader to help me realize that passage-based essays aren't scary.

Books I used: Molly's Pilgrim by Barbara Cohen, Weslandia by Paul Fleischman, and The Memory Coat by Elvira Woodruff

Copies of the passage-based essay prompt, graphic organizer, and rough draft page can be found in this unit.