Depth of Knowledge in Science 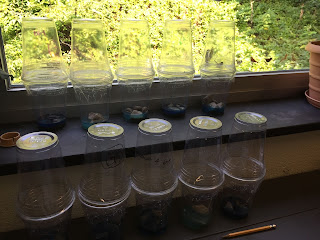 As I move from teaching fourth grade to teaching sixth grade, I've noticed a great deal of overlap between the two curriculums*. This is not necessarily a bad thing, as so many of the big concepts are really important. However, knowing what kids learned in fourth grade is leading me to try to delve more deeply in sixth.

In the first few weeks of school, I reorganized an existing activity to add more depth. Originally, the activity was a standard water cycle model. You can see them in the photo to the right. The original activity had students identify the evaporation and condensation going on in the model.

How could I ratchet up the thinking in this activity? I decided to explore the word model. What is a model in science, and what is the role of a model? Both our PA standards and the NGSS place an emphasis on the creation and analysis of models in science class. However, not many traditional curricular materials for elementary school engage students in exploring the worth of a model.

So then, after we made the models, we didn't stop at looking for examples of condensation and evidence of evaporation. Instead, I asked the students:


Is this a useful model of the water cycle? Why or why not?

Students referred back to the water cycle diagrams that we had made together and worked in groups to discuss. It was beautiful to observe! Best of all, there was wide disagreement. Most of the disagreement had to do with the way that we set up the models on the windowsill--the models that were closer to the window had much more condensation that the windows that did not. 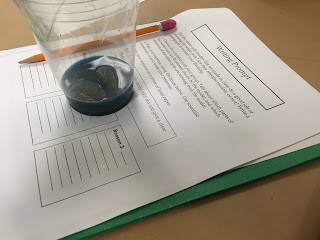 Some other models had been bumped and had blue water droplets clinging to the sides. "When it evaporates, it should be clear, right?" one student asked. "So why is it blue?" This led to a discussion of a model that is so fragile that a slight bump can change the results. "If someone who didn't know about evaporation looked at it, they might think that the water evaporated blue!" a student said.

The task also required students to refer back to their resources about the water cycle. "Would there be transpiration in this model?" one student asked her group. "There wouldn't, right? Because there are no plants." In another group, peers corrected a student's misconception about groundwater. "The water on the bottom is the groundwater because it's on the ground," she said. Group members went back to the diagram to talk about why they thought the water represented surface water instead.

The writing prompt was a straightforward introduction to science argumentation, as I provided students with a claim that they could use as their topic sentence. Some students wanted to write more than a paragraph, while others stuck with a simple explanation. This will give me great information about where they are with science writing so that I can plan instruction from this point.

For a busy teacher, re-making existing activities to involve deeper levels of thinking is a great way to build from an existing curriculum. What activities have you improved upon?

You can find the writing prompt and activity in Watersheds, Wetlands, and Water Resources: Texts and Activities over at TpT.


*I like "curriculums" instead of "curricula" because I think it's fussy to apply Latin-based rules to modern words. It's an acceptable plural here.
By Emily Kissner at September 20, 2015