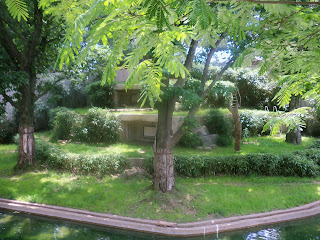 The behavior of animals at the National Zoo before this week's earthquake has puzzled many scientists. Here is a link to the Washington Post article about the phenomenon:

Zoo Mystery: How did apes and birds know quake was coming?

This article uses a cause and effect text structure pattern, but with several twists. First, the effect is presented before the causes. From a writer's point of view, this makes sense. After all, the effect is the interesting part that will intrigue readers into wanting to read the rest of the article. Chronologically speaking, of course the causes happened first. But writers can play around with time to show ideas in the way that makes the most sense for readers.

Another twist on the usual cause and effect pattern is that this text shows possible causes. The writer uses many words that show the lack of a definite answer--speculation, mystery, lore, suggested, unresolved.  When teaching cause and effect text, it's important to show students how authors signal the degree of certainty with causes and effects. With persuasive texts, unscrupulous authors often avoid these uncertainty words to make their cause and effect relationships more convincing.

How would these ideas be presented with a graphic organizer? Even though the text plays around with chronological order, I'd show the causes and effects as they happened. Here's my attempt: 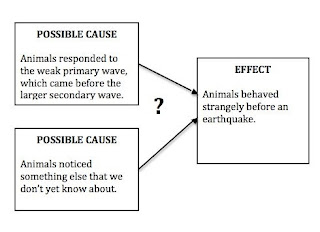 For students, I'll encourage them to use a question mark, as well as the headings "possible cause" to show that we just aren't sure if these causes lead to this effect. If students are drawing graphic organizers, wavy lines or different colors could also be used to show uncertainty.

National Zoo official press release (Notice how this states only the effects, with no mention of possible causes. Why do you think they did this?)

Live Q and A with zoo keeper (Great for comparing firsthand and secondhand accounts!)

Live Science article (This one includes only a very short paragraph to guess at causes. Based on the National Zoo info, would students agree that the animals "went berserk"? Why might the author have chosen this heading?)

National Geographic article about 2004 tsunami (This article discusses similar incidents before the 2004 tsunami, and discusses a possible "sixth sense" that animals have. How is this description similar to the Washington Post article? How is it different? How has scientific thinking changed?)